When you first jump into the Linux world, you may think of Linux as simply an alternative operating system. In reality, Linux is a collection of hundreds of different operating systems, which are all built on the Linux kernel.

There are a few major distributions, such as Red Hat, Debian and SUSE, that predominate in business settings. There are also hundreds of other lesser-known distributions, like Slackware, Gentoo and Arch Linux. These smaller-scale distributions cater to their own use cases. We will cover all of these here, and provide some suggestions on when to use which Linux distribution.

Picking the Right Distribution for Your Business 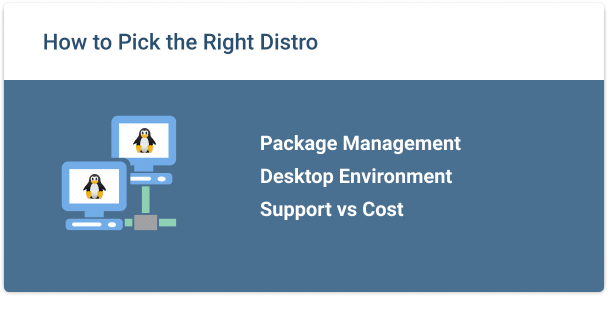 There are a number of considerations to weigh when determining which Linux distribution is best for you, such as which package manager the system uses, which graphical interfaces (if any) it offers by default and which software can run on it.

Like package managers, each of these desktop environments are fully functional. The decision comes down to the preference of the administrator. When deciding on the best Linux system for you, it’s a good idea to test out each desktop environment and get an idea of which one you prefer.

Businesses with less cash available may look to other distributions for cost savings. CentOS and OpenSUSE offer pretty much the same operating systems as RHEL and SUSE Enterprise Linux, without the costs of the associated support package. Each of these latter distributions is free to download and install.

Each system has its own purpose or intended use case. Different purposes are better suited by different distributions. The primary use case for SUSE Enterprise Linux, Red Hat Enterprise Linux and CentOS is servers, even though they can be installed on workstations as well. In instances where a desktop environment isn’t needed and a lightweight system is preferred, advanced administrators may consider a distribution like Slackware. In environments where client machines and servers run on the same network, Ubuntu may be a good fit. If the latest and greatest technology is preferred, Fedora may be the best choice.

Debian, which dates all the way back to 1993, is one of the oldest Linux distributions still being developed today. Presently, the most popular Debian-based system is Ubuntu.

Ubuntu, distributed by the UK-based company Canonical, is one of the most popular Linux distributions available today. It is free to download, install and use. Ubuntu is packaged in three different editions - Server, Desktop,and Core.

Because it is generally understood as a very simple operating system to install, many first-time Linux users start by using Ubuntu. Some popular Windows applications, such as the Firefox web browser and Thunderbird email client, can be run on Ubuntu. Ubuntu offers new releases every six months, with major long-term support (LTS) releases available every two years. 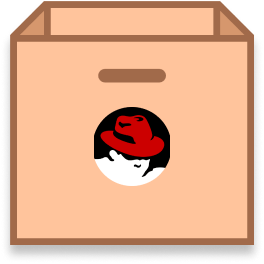 Red Hat Enterprise Linux was first released in 2002. It is developed and licensed by Red Hat. Unlike Ubuntu’s server operating system, it is not free. One license of the Red Hat Enterprise Linux Server with “self-support” costs $349 (prices increase for additional levels of support and add-ons). Many businesses find that the level of support offered by Red Hat makes the cost of the operating system worth the investment.

Administrators who want the RHEL operating system but don’t want to pay for it can use CentOS instead. CentOS was originally released in 2004, and Red Hat officially took it over in 2014. Red Hat doesn’t offer any official support for the CentOS distribution, but there is a large community of users on the internet that continue to share information and support each other.

Fedora is another distribution supported by Red Hat. Like CentOS, Fedora is also free to install and use. Fedora will generally offer features before they become available in the RHEL operating system. Like Ubuntu, Fedora offers both Workstation and Server editions.

SUSE Linux, while not as popular as Debian-based Ubuntu or any of the Red Hat distributions, is still considered to be one of the mainstream Linux distributions. SUSE was originally founded as a Unix-type system in Germany in 1992. Since then, it has changed hands a number of times, and is now owned by EQT, a Swedish private equity group.

OpenSUSE has two editions - Tumbleweed and Leap. Leap offers stable releases about every six months, while Tumbleweed is continuously updated. OpenSUSE traditionally featured KDE as its default desktop environment, but now allows users to select either the Gnome or KDE environment upon installation. The default front-end package manager for all OpenSUSE editions is YaST.

While Debian-based Ubuntu, SUSE, and the Red Hat distributions take up most of the Linux market share today, there are a few additional smaller distributions worth mentioning as well, including Arch Linux, Slackware, and Gentoo:

Be sure that you have a good idea which package managers meet your needs, and which desktop environments you prefer. Have an understanding, too, of what type of support you’ll need for your system, and of your system’s purpose. Finally, be honest with yourself about your level of Linux expertise. Some distributions are easier to use than others.

Once you have an understanding of all of the above, you will be able to narrow down your distribution choices, and pick out the system that will be the best fit for you.