There are many data backup tools on the market, and they’re all capable of performing basic data backup operations. The key differentiators between generic backup solutions and those that go the extra mile, however, lie in the levels of manageability, reliability and support that these products deliver.

That is the takeaway from one French IT department’s experience implementing a managed backup service for the multiple business units that it supports. Here is what the department needed in a backup product, and why it chose MSP360 Managed Backup to meet those requirements.

Created in 2005, the Baobab Group provides financial services to entrepreneurs across Africa and China. Among their IT department’s responsibilities is delivering managed cloud computing services for the company’s various business units, including cloud storage and cloud-based virtual machines.

The department leverages the Amazon Web Services (AWS) cloud as the backbone for its managed cloud services. Originally, the team took a manual approach to backing up those resources: They created backup copies of cloud-based virtual machines on their own, without the help of a tool that could centralize and standardize the process.

The inefficiency of this strategy pushed Baobab Group to look for a platform that would allow its team to back up mission-critical AWS resources faster and more reliably.

The team evaluated three backup platforms. Although all were capable of backing up AWS resources, the department settled on MSP360 Managed Backup for three main reasons.

First, MSP360 demonstrated a high degree of reliability. “For years, our experience is that it ‘just works,’ and it gets even better with time,” said Gerald Patterson, Cloud Computing Solutions Architect at Baobab Group, about MSP360. Other backup tools were not able to deliver the confidence the team needed to ensure that its backups would run smoothly and that data could be recovered quickly if necessary. 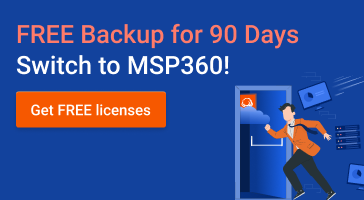 The Baobab Group also liked MSP360’s centralized management features. The product offers a central portal where the team can track all backup operations, eliminating the need to toggle between multiple tools or dashboards. Because the department backs up multiple types of cloud resources, centralized management is critical for enhancing usability and efficiency.

Finally, MSP360 stood apart from the other backup options for its flexibility and customer support. In addition to providing 24/7/365 customer support with an average response time of just few hours, MSP360 went out of its way to add features that Baobab Group needed. Those included support for performing preset actions prior to running backups, a feature that MSP360 implemented in its product partly in response to a request from Baobab Group.

Today, the Baobab Group has been using MSP360 Managed Backup Service for more than four years. The platform powers the team’s backup operations not just for AWS-based data and virtual machines, but also for the department’s SQL databases. By delivering reliability, efficient management features and top-notch customer support, MSP360 provides Baobab Group with a level of value that other backup products cannot match.