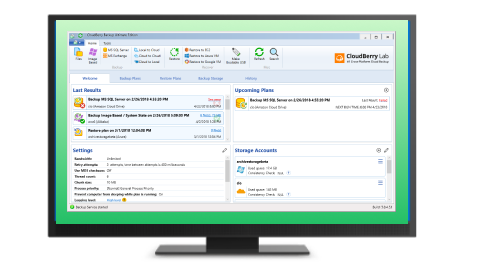 MSP360 Backup already offers backup resumption for file-level backup which lets users continue an interrupted backup plan without having to re-upload the entire data set. In release 6.0 we extend this functionality to image-based backup.

Prior to release 6.0, MSP360 Backup would completely re-upload the entire image if an image-based backup failed due to user intervention or internet connection outage. This proved to be extremely inefficient, especially when the estimated upload time was close to several days. Imagine that you're backing up a 4-terabyte SSD, and midway through the execution your internet connection falls off. Those two terabytes that are already in the cloud are not reusable and will have to be re-uploaded again during the next execution. This inconvenience is further exacerbated if the upload issues persist indefinitely, forcing you to endlessly upload terabytes of data.

In release 6.0, however, we've implemented upload resumption for image-based backups, letting you upload only the remaining data in case the plan was prematurely terminated. If that happens, simply click on the Play button and MSP360 Backup will pick up where it left off during the last execution.

The benefits may not be immediately tangible, but over time you'll have significantly reduced upload volumes and bandwidth utilization.

MSP360 Backup continues improving and in release 6.0 adds image-based backup resumption. With it, MSP360 Backup no longer re-uploads the entire data set if an image-based backup was prematurely terminated. The benefits are clear — faster upload times, lower bandwidth utilization, and fewer requests to the cloud storage. Feel free to check out MSP360 Backup 6.0 and share your feedback in the comment section below.