Choosing a NAS Backup Solution for MSPs and SMBs

For small and medium-sized businesses Network-Attached Storage (NAS) is a convenient and cost-effective storage solution. NAS devices make it easy to expand the amount of storage available to your workstations and servers while keeping the data on your own infrastructure and local network. NAS devices also usually make it easy to configure redundant storage using RAID arrays or a similar technique.

Given the large number of NAS backup solutions available for the SMB market, it can tough to decide which option to choose. In this article, we offer some guidance, based on feedback from our customers. While MSP360 itself is not a NAS vendor, many of the managed services providers for whom we provide data backup and restore solutions do use these products.

We’ve solicited their feedback to generate the following guide to NAS storage for SMBs. The guide walks through the major questions that an SMB should ask when choosing a NAS backup solution. If you are not sure that you need a NAS device, but your client needs a local storage solution, check out our guide to using Local Storage as a Backup Destination.

Let's start by explaining the basics that any MSP should understand about a NAS when selecting a solution.

What Is a NAS? 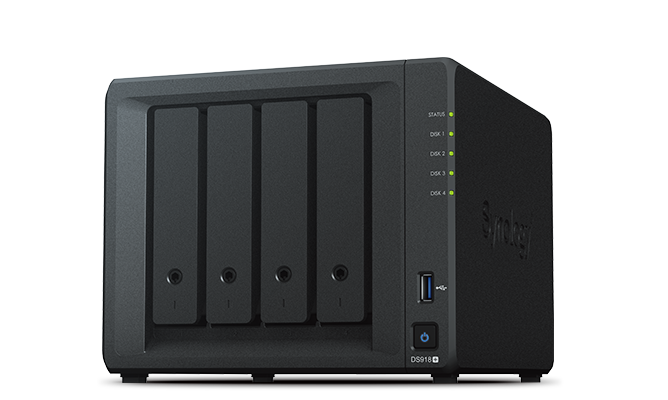 This is a Synology NAS device with 4 bays

For starters, understand what a NAS is: A storage device with its own hardware and operating system. Importantly, the hardware that ships with a NAS typically does not include hard drives. Instead, the NAS comes with bays, into which users install hard drives that they purchase separately. To learn the difference between NAS and SAN refer to our article:

Why Use a NAS?

NAS devices allow you to two main things. The first is to store data. By setting up a NAS, you can add storage space to your business.

However, increasing storage capacity is not the only reason to use a NAS. An external hard drive with USB 3.0 may be faster for input/output operations, but NAS devices can be accessed via a local network by multiple users.

It's common for SMBs to use NAS devices as local backup mediums. In this use case, a NAS provides storage space for data backups, while also enabling fast data reads and writes so that backup and restore processes can be completed more quickly.

The number of bays in your NAS is one important factor you should think about when selecting one. The more bays you have, the more drives (and thus the more storage capacity) you can add to your NAS, and (just as important) the more flexibility you have in configuring your NAS. In many cases, you can add additional bays to your NAS using an expansion unit, but not all NAS devices support expansion units, so you'll want to check on this before you make a purchase.

In most cases, NAS devices are configured as RAID arrays. A RAID array is a set of disks that are configured in such a way that data is replicated across them. That way, if one disk fails, data remains intact.

RAID can be configured in different ways. A full discussion of different RAID techniques is beyond the scope of this article, but in general, we recommend against using RAID 1, a basic mirror configuration that provides limited data redundancy. RAID 5, 6, or 10 configurations are better because they distribute (or "stripe") data across multiple disks, and can keep your data intact even if more than one disk fails at the same time.

Further reading What is RAID?

Keep in mind that RAID, while useful in providing some data protection, should not be the be-all, end-all of your data backup strategy. It's possible for RAID arrays to fail -- as could happen if multiple disks fail at the same time, or your entire NAS is destroyed by an event like a flood or fire. RAID arrays on a NAS can be a useful place to store one backup copy of your data, but you should adopt a 3-2-1 backup approach that incorporates separate remote storage to achieve a higher degree of data protection.

RAID can be built into hardware devices, or it can be configured using the software. Some modern NAS devices come with a software RAID system preinstalled.

As noted above, hard drives don't typically come with your NAS. You have to install them yourself.

There are a lot of hard drive options on the market. One general guideline is to avoid using consumer-grade drives, as they lack good support and are prone to failing sooner. Instead, use enterprise-grade hard drives.

We also recommend referring to Backblaze's hard drive reliability data for helping to determine which brands and models of hard drives deliver the best performance. But remember that there is only a margin of difference of around 10 percent in the failure rates of almost all hard drives, so your decision will also have to be based largely on which types of disks your NAS supports.

Now that we understand what a NAS does and what it consists of, let's consider the questions you should ask yourself when picking a NAS.

1Choose between QNAP and Synology
These are the major NAS vendors for SMBs and MSPs. They are both good, according to our customers, although Synology is more popular.

2Define the storage needs
Determine how much storage you require. This number should reflect not just how much data you have to back up to your NAS, but also what you are. More demanding RPO and RTO rates will require more drives in your NAS (in order to achieve faster restores and have more points in time to recover from).

3Define RAID type
As noted above, there are several different RAID configurations possible. Typically, the higher the RAID number, the better your level of data protection and performance, although you will also need more hard drives to achieve those higher-level RAID configurations. The typical choice is between a RAID 5 or RAID 6.

4Choose a NAS model
Once you've determined your storage needs and RAID type, you can select a specific NAS model that delivers the number of expansion units, processor type, and RAM that suits your needs.

5Choose hard drives
With your NAS selected, you can look up which types of hard drives it supports, and choose your drives accordingly. Again, we recommend avoiding consumer-grade drives. At the same time, however, don't overdo it by selecting the most expensive drives. Devices like Seagate Ironwolf and Western Digital Red/Red Pro are good options, according to our customers.

NAS devices are a good solution for adding high-speed storage to your business, for use with tasks such as data backups. However, a number of factors impact NAS performance in a number of important ways, such as your RAID configuration, your NAS device's expandability, and the type of hard disks you use.