AWS and MSP360: A Powerful Combo for Your Data Protection 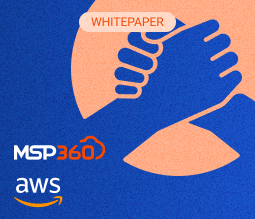 This is the third article in a three-part series on Amazon S3 Security In-Depth. In Part I of this series, we discussed the different mechanisms you can use to allow access to your Amazon S3 buckets and objects. In Part II, we looked at writing identity-based policies to manage access to your S3 resources. In this Part III, we will cover authentication and identity within the context of AWS Identity and Access Management (IAM).

In the previous post in this series, we noted that IAM has two broad categories: identities and permissions. Permissions, which we covered in the previous post, describe which actions a particular identity may or may not perform. These permissions are managed in IAM policies, and AWS allows you to write fine-grained policies to lock down access to your resources.

The second half of IAM is identities, which are the tools used to authenticate requests within the AWS ecosystem. This topic includes user and group management, authentication credentials, and delegation. IAM identities are the focus of this post. 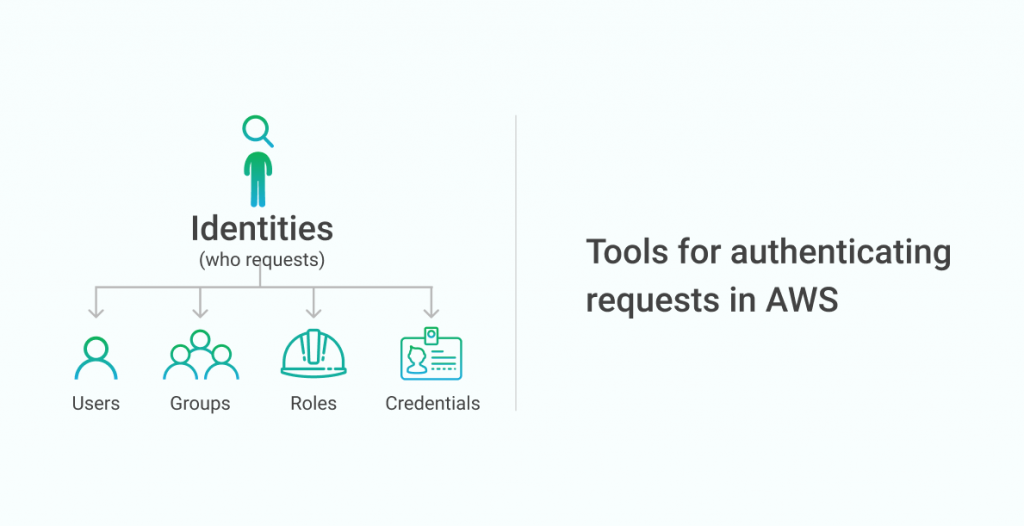 When making a request to Amazon S3, your request is either anonymous or authenticated. If your request is anonymous, this means you have not included any credentials used to identify yourself as a user. For your request to succeed, you will need the relevant permissions to be granted via an S3 bucket policy or an ACL. Read Part I of this series for more information on these permission schemes.

More commonly, you will make authenticated requests to your S3 resources. Authenticated requests use access keys to identify the requesting user. Access keys are similar to a username and password -- there is an access key ID, which is comparable to your username, and a secret access key, which is similar to your password. AWS uses a request-signing method using the AWS Signature Version 4 algorithm, or “Sigv4” for short. The details of Sigv4 is outside the scope of this article, but you can check out AWS’s materials on authenticating with Sigv4.

In the previous section, we learned that AWS uses access keys to authenticate the identity of the entity making a request. In this section, we’ll learn about one way to provision access keys by creating an IAM user.

An IAM user is an entity in IAM that should map to an actual human user. When creating an IAM user, you can provision a password that allows the user to sign in to the AWS console. You can also create up to two access key pairs for the IAM user. These access key pairs are most commonly used with something like the AWS CLI for interacting with AWS resources in your terminal or with GUI tools like MSP360 Explorer that help you manage your AWS resources.

By default, an IAM user has no permissions. You can grant an IAM user the ability to access and manipulate resources by attaching policies to the user. We covered writing IAM policies in the previous post in this series. Be sure to check the “Use Managed Policies over Inline Policies” portion of the Best Practices section below for additional advice on IAM policies.

Often you will have multiple IAM users that need the same IAM permissions. To make this easier, you can create an IAM group. An IAM group is a collection of IAM users. You can attach policies to an IAM group just as you would to an individual IAM user, and the policies will apply to all users in the group.

AWS and MSP360: A Powerful Combo for Your Data Protection Strategy
Discover how MSP360 and Amazon S3 can benefit your business

An IAM role is similar to an IAM user, with a few key differences.

IAM roles can be unintuitive at first, so let’s walk through two examples of where IAM roles prove invaluable.

#1 IAM Permissions for an EC2 Instance

First, imagine that you have a user-facing web application that is running on EC2 instances. Your application will save and display images from Amazon S3 and thus will need the proper IAM permissions to interact with your S3 resources. Without IAM roles, you would need to create an IAM user and generate an access key pair. Then you would need to make sure the access key pair is available to your web application on the EC2 instance. If you’re automatically creating and destroying EC2 instances as your application scales up and down, you’ll need to determine a secure way to store your credentials that your new instance can access on boot. Finally, you’ll need to manage the rotation of those access keys without causing downtime to your users.

With IAM roles, this process is much easier. You can associate your EC2 instance with an IAM role upon creation, as shown in the screenshot below.

Your EC2 instance will have access to temporary access credentials for making requests to AWS services. These credentials will have the permissions given to the IAM role you delegated to the EC2 instance. You no longer need to worry about access key management or key rotation on your instances -- it’s all automatic.

#2 IAM Roles in the AWS Console

In the first situation, this can be helpful if you want to force an IAM user to go through an additional level of security before performing important actions. For example, deleting an S3 bucket may require a user in the AWS console to assume a higher role that requires multi-factor authentication. This can ensure that S3 deletion by a bad actor on a browser that was left open.

The second time it might be helpful - if your organization handles multiple AWS accounts, such as different accounts for development, staging, and production. You allow an IAM user in one account to assume an IAM role in another account. This allows your developers to manage one set of authentication credentials while still maintaining separation between AWS accounts.

When it is necessary to use IAM users rather than roles, do not share your user’s access keys with multiple people. Each person that needs AWS console or programmatic access via the AWS CLI or language-specific SDKs should have their own IAM user with their own credentials.

There are two reasons for this.

Note that if you’re using IAM roles, you don’t need to worry about rotating access keys. AWS will automatically provide you with temporary access keys when you’re using a role and will manage the rotation of these keys.

#4 Use Managed Policies over Inline Policies

AWS provides a few different services that allow you to monitor the actual API requests made by particular users in your systems. There are two that are relevant for Amazon S3.

First, AWS CloudTrail is a service that tracks certain high-level API calls across many different AWS services. Generally, CloudTrail works to log API actions that occur at the control layer -- deleting an S3 bucket, creating a new DynamoDB table, etc. It usually does not log actions that occur at the data layer -- reading an S3 object, inserting an item into a DynamoDB table.

The CloudTrail integration for Amazon S3 is more expansive. By default, CloudTrail will log all bucket-related actions in Amazon S3. However, you can also choose to enable object-level actions, including all object reads and writes. You will be charged for the additional volume, but it can be a great way to get granular data on your S3 access patterns.

In this post, we discussed the identity aspect of IAM. We learned how AWS authenticates requests, then covered IAM users, groups, and roles. Finally, we learned some best practices around managing your IAM identities.

This concludes our three-part series on Amazon S3 Security. You should have a basic understanding of the various tools at your disposal and how to avoid some serious mistakes. Security is a complex issue that is never finished, so don’t stop learning. Set up the proper processes to allow your team to move quickly while staying secure. 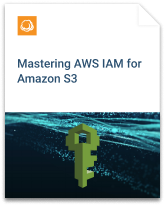